GET STARTED FOR FREE

5 tips for making it big as a DJ/Producer

Becoming a successful producer and DJ starts and ends with the music you make. But in between, your success hinges on more than just your sound. In the world of social media, you’re not just a musician. No, you’re also a self-marketer and content producer with a vested interest in broadcasting your music career – and personal life – online.

Marketing yourself on social media is a multifaceted game and an appetite for self-promotion is crucial. If you want to make it BIG, then have a look that these five tips we compiled to get you heading in the right direction:

1. Use social media to your advantage

Social media has leveled the marketing playing field. Thanks to Facebook, Twitter, and Instagram, you no longer need vast sums of money to get noticed on television spots and big billboards. Those days are long gone as we are in a new, digital age.

Of course, a level playing field equals more competition, and with audience attention spans getting shorter, you have your work cut out for you. Still, don’t despair, because social media presents you a unique opportunity to get noticed.

The best exponents of social media lay their personality bare. Deamau5 is vocal and unabashed on Twitter; Skrillex uses Facebook to talk about what inspires him; A-Trak shares festival pics and behind-the-scenes snaps.

If the biggest DJs in the world are taking the time to market themselves online (and making themselves more relatable at the same time), that means you need to be working twice as hard.

Aim to be consistent and prolific. Share daily pictorial updates and give your followers a taste of what it’s like to be an up-and-coming producer. Better yet, ask your followers to get involved in the song-making process by asking them to suggest a song they’d like to see you remix next. This way you’ll turn passive followers into bona fide fans with an active interest in your fortunes.

Which brings us to our next point…

We are huge supporters of original tracks, but for up and coming producers, remixes are a no-brainer and they should be a staple part of your musical output. Many of the most popular DJs in the world got their break with a well-timed reinterpretation of a famous song. Just look at Kygo. The Norwegian might have made a huge impact with his self-produced smash hit, Firestone, but his break came when he took Ed Sheeran’s I See Fire and applied his now-signature melody to the track.

Don’t be afraid to take a popular song and give it a new slant. You need to look no further than RL Grime’s remix of The Hills, one of 2015’s biggest tunes, to see just how effective it can be to reinvent a popular track. Grime takes the hypnotic and discordant single, ups the tempo and adds synth-heavy drop. This is a remix that oozes club-ready appeal and plays perfectly into his strengths.

To easily accomplish this, find a big name artist who has released the stems to their hit track and start remixing. 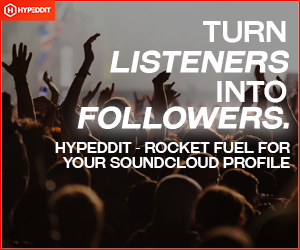 3. Sort out your “visual identity”

Once you’re committed to the goal of making it big, make sure you’ve got promotional material covered. We’re talking about eye-catching cover photo designs, a logo to call your own and a decent set of press photographs, too. This stuff matters.
You’ll be able to use this promotional material to make a splash across social media and create hype about your club appearances, while they’re perfect for SoundCloud, too.

Take a look at big name producers on SoundCloud and you’ll notice a trend: they all have an eye-catching cover photo, a distinctive profile picture and a logo that characterizes their music. Plus, each individual song uploaded to the platform is finished off with a good-looking album cover. Invest in a visual identity and you’ll reap the benefits. To get started check out our article how to easily create amazing cover art.

4. Focus on a signature style

If you’re lucky enough to start performing live, your next step is to carve out a signature style – in the flesh. Skrillex has the distinctive haircut, Justice has the giant cross and Deadmau5… well, he rocks a giant mouse head.

Look, you don’t need to alter your style drastically if you don’t want to, but cultivating a signature look is part and parcel of show-business, and it’s not just DJs who do it either.

Famous politicians, businessmen and actors all subscribe to a signature style that singles them out. If you can define your look and live up to it on stage, you’re simply enhancing your showmanship appeal. Coming up with a quirky prop, or a signature outfit, will help you stand out, become more memorable, and will also give people a better idea of what you’re all about.

Many producers appear out of nowhere to take the world by storm, but in reality, they’ve been hard at work at their craft for years.

Truth is, there’s (almost) no such thing as an overnight success. Fame and fortune is the culmination of perfecting the craft, marketing oneself and never losing sight of the long-term goal.

There’s the old truism that states you need10,000 hours of deliberate practice to become world-class in any field. Though it’s entirely possible to become notorious before you’re world-class, your staying power will ultimately live and die with your music.

So keep practicing. Because in the end, it starts and ends with the craft, and the more you practice, the likelier you are to hit it big.